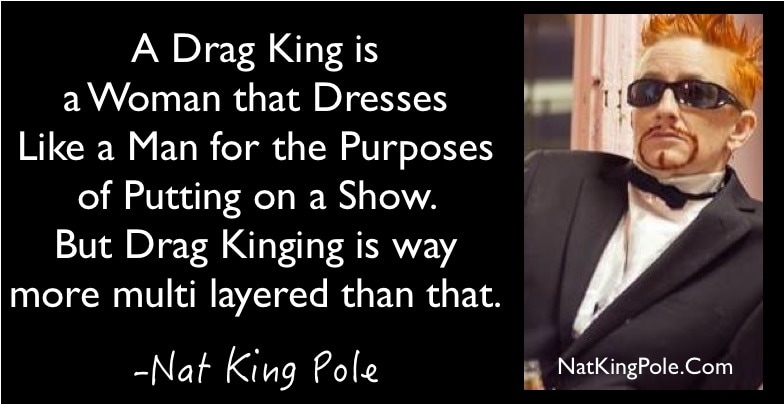 Read the full piece at http://www.franktalks.com/blog/profile-of-a-drag-king

“I read somewhere that Frank Sinatra planted women in his audiences to scream and faint. Then it became a reality, and women did start screaming and fainting,” he says. “One night I got a bunch of friends to go to the Dollarama and buy panties and throw them onto the stage, and it became a thing. Now when I go somewhere, people throw panties. I haven’t gotten any used ones yet. Not that I know of, anyway. But I’ll take ’em.”

“I’d take ‘New York, New York,’ and the lyrics would be ‘Start spreading your legs, because you’re coming today. I want to be a part of it, poppin’ your cork,’” he says. “Another example is ‘Whole Lotta Love’ by Led Zeppelin. I’d sing, ‘You’ll need a whole lotta lube if you’re gonna be with me.’”

Drag-king acts are always hot but rarely vary in format (costume, mustache and a series of lip-synched tunes). Occasionally, there’s a more theatrical performance or a king will sing a song (lip-synching the rest). The Pole Man not only writes his own lyrics, but sings all his songs himself. “There are so many drag kings and drag queens out there. I had to do something to stand out in the group,” he says.

The Pole Man’s been a hit in Montreal for over a decade and has collected frilly undergarments in such places as Boston, Philadelphia and Provincetown, but his upcoming solo performance at The Blake House will be his long-awaited first show at that venue.

Those who miss the show can catch his shorter set the following day, with Sinful Sundays Burlesque at Cherry Cola’s, where he’ll be very much in his element as a lone lech in a sea of sexy burlesque ladies. This is sure to make for a plentiful panty harvest, but it’ll be a miracle if he makes it out of there without having his mustache slapped off.

Update: due to an unfortunate fire at the Flying Beaver, Nat King Pole will be performing downstairs at The Blake House (449 Jarvis) at 9:30 pm on Saturday, Feb 21.

“I was playing a lot of hockey about eight years ago,” Théorêt recalls. “And then I decided I wanted to take a break. I realized then how much I missed singing. I asked Miriam Ginestier, who organizes the Meow Mix cabaret events, if I could sing. She said she didn’t just want me to sing, she wanted something a bit more vaudevillian.”

That led Théorêt, who is a nurse by day, to start concocting an act.

“I wanted to find a way to sing onstage, so I thought, ‘What if I put on a mustache?’ But then I started to think about an actual character I could portray, a guy who thought he was a hit with the ladies.”

Théorêt recalled how impressed she was by the sublime antics of the famous, but now disbanded, Montreal drag-king troupe The Mambo Kings. So on one fateful night at Meow Mix, Nat King Pole – who salutes legendary singer Nat King Cole in name only – took his first bow. “I thought it would last for a couple of gigs, nothing more,” she says.

But people love Pole, as she found out. “I was actually quite shocked by how popular he is, and how people take to him. Basically, as Pole, I’m saying things that aren’t very pleasant. But because I’m a woman, people know I don’t really mean the sexist-boorish stuff I’m saying. It’s safe because I’m a woman.”

Théorêt doesn’t lip-sync but rather sings her own raunchy lyrics to popular tunes. Her biggest crowd-pleaser is Justin Bieber’s “Baby, Baby,” reconfigured as “Nag me, nag me.”

And Théorêt, who has taken her act to Toronto and Ottawa Pride events over the years, says some of her biggest fans are straight. “Women will come up to me and say, ‘My husband loves you.’ Again, I think because I’m a woman it’s all seen as safe.”

Is there another drag performer Théorêt admires? RuPaul, she says. “I’d do him.” She recently performed with an up-and-coming drag artist, Ella S Bonita. “He’s really great. One of the things I like about him is that he doesn’t take himself too seriously. Some drag queens take themselves very seriously. I think it should be about having a good time.”

Théorêt argues that “using humour is the best way to reach an audience. If I’ve got a point to make, that’s how I’m going to do it. I think you will appeal to an audience if they want to be your friend, or feel like they could be your friend.”

It must be asked: why is drag such an enduring, popular act? “You know, it’s a mystery. People do love it. I think we’re all a little bit bisexual. Perhaps the crossing of lines in drag appeals to us because of that, the bisexuality. Or maybe it’s just a Montreal thing, I don’t know.”

For the single and broken-hearted, the days prior to Valentine’s Day are filled with annoyance, bitterness, and a dash of jealousy. While single students rebuff all things red and heart-shaped, making plans to burn their ex-lovers’ things, the couples of the world smile, frolic, and get to have all the fun—but who says singles can’t be in high spirits too? This V-Day, take your cue from the Concordia Co-Op Bookstore’s Mix Tape for Heart Break, and fill your loveless Anti-Valentine’s Day with friends and humour instead.

The show marketed itself as “X-rated fun” with “saucy surprises, which may leave you feeling flushed.” I was half expecting a sombre burlesque show where performers were clad in black leather, S&M style. Ironically enough, I couldn’t even bribe any of my friends to accompany me to the Anti-Valentine’s Day event, so I walked in anxiously, knowing I would be an awkward single spectator. If it wasn’t bad enough that I was alone, I somehow managed to miss the memo that although doors opened at 7:00 p.m., the show didn’t even start until 7:45 p.m. Cue uncomfortable lingering and text messaging everyone that I know.

Although initially disappointed to see the shop decorated cheerfully with miniature cupids dangling from the ceiling, it was evident that the night would be a variety show of mixed-bag talent, and I was no longer concerned I would be called on stage for some X-rated fun; it was not that kind of show. The first act started off on the right foot, when Lizzy, a Concordia student, read an excerpt from her published book of short stories. “Role Play” had the audience howling as Lizzy recalled the dirty-talk she exchanged with a past lover who had an affinity for Russian culture and would yell things like, “Oh, my borscht!” during sex.

Next, Alex Chow was called to the stage with his highbrow violin act based on Italian musician Paganini’s work, who is rumoured to have slept with eleven women in one night and composed thematic pieces based on his encounters. Chow called his rendition “Ode to Douche Bag,” and the titles he played ranged from “No Strings Attached,” “The Lazy One (In Bed),” and “The Kinky One.” It was the perfect mix of sophistication and vulgarity.

The showstopper, and my favourite act of the night, was Nat King Pole’s musical style. The drag king had the audience begging for more as he took popular songs and inserted his own lyrics, adding a comedic, queer flare. His songs included a remix of Supertramp’s “Give A Little Bit,” Cyndi Lauper’s “Girls Just Wanna Have Fun,” and Justin Bieber’s “Baby,” as well as his own composition entitled, “Drop the Beaver,” which he asserts will be the next Canadian classic.

FLIST!, also known as Montreal musician and composer Charlie Twitch, finished off the evening with his vocal and dance performance, which was perhaps the most dismal and solemn of the acts, but deeply poignant nonetheless.

My first Anti-Valentine’s Day experience at the Co-Op was unexpectedly entertaining and enjoyable. Despite my single status, it inspired me to keep my spirits jovial this holiday season.

Circe was inspired to create this piece by her friend who performs as a Drag King in Montreal, Canada. In this painting, she looks at the iconic persona of the Drag King, and seeks to give context with the energy and humor, the strength and humanity she finds inherent in this performance art. Circe delves into the construction of identity, of gender and the often seen taboo of crossing that construct. Please visit Circe’s site to purchase prints of this painting.